Top Posts
How to Get Paid Market Research Studies and...
8 Travel Hacks to Save Money on Flights...
22 Things to do in Peru besides Machu...
My Argentina Budget!
Israel Budget ~ How Much Does a Trip...
My Cuba Budget
My Jordan Budget!
24+ Best Places to Visit in China Besides...
Using a Travel Agent vs Booking Online
Planning a Trip to Antarctica? How I Chose...
Home TypesAdventure Nazca Flights ~ Great Nazca Tours Review

When I decided to head down to Peru, I knew I had to find a way to make a flight for the  Nazca Lines Tour to happen (they’re also known as the Lineas de Nazca).  I’ve heard of them for years in a variety of places from National Geographic to Ancient Aliens.   When I was making my budget for Peru, I made sure to include it!  The real trick was finding the perfect tour company to go with.  After reading several reviews and doing a lot of research, let me save you the trouble. Use Great Nazca Tours for your Nazca flights!

Why Great Nazca Tours for the Nazca Lines Tour?

Great Nazca Tours has a 5 star review on Tripadvisor, which is well-renowned.  I also like that it’s a local company. It’s important to give back to the local economy. since some larger companies are owned elsewhere.  Even if the employees are local, not all the money stays local.  Their website also had an English component, so it was obviously much easier for this gringa to read when I was doing my research for a Nazca Lines Tour! 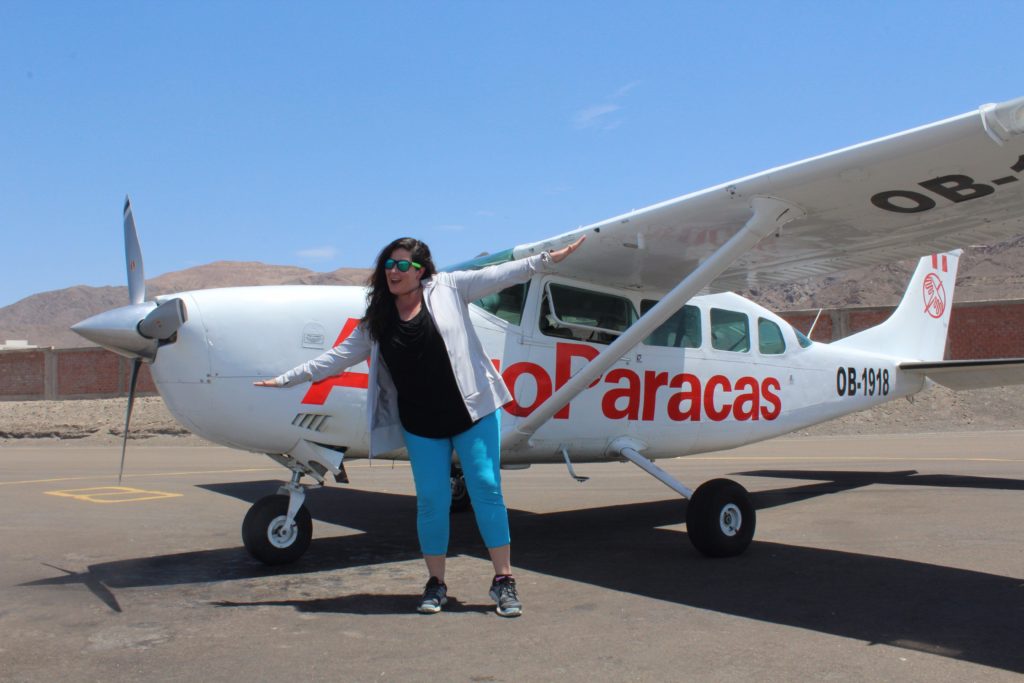 They also have more than one tour too!  I wish I had the time to take some of the others!  The two that looked the coolest were the Aqueducts tour (unfortunately, I had to immediately leave to drive back to Huacachina, otherwise I would’ve totally done it! Don’t miss out!) and the Chauchilla Cemetery tour.  Seeing creepy stuff is creepy, but it’s also steeped in history.

Bonus! If you don’t want to drive all the way down to Nazca yourself (which I recommend because there are some cool stops along the way), they also have a Nazca flights tour that leaves from Lima! Relax all the way and know you’ll be taken care of 🙂

Want more of Peru? – Check out this list/map of other amazing places in Peru or how to fit Nazca into a 2 week Peru Itinerary!

The Guides of the Nazca flights

I was met at the Nazca airport by Oscar.  His name popped up quite a lot in the TripAdvisor reviews, so I know it wasn’t a fluke that he was so great with me.  Before I went on the flight, I got a pre-flight briefing! How official 🙂  He walked me over to a large map to see all the geometric shapes and animal figurines that I’d be seeing from the plane. 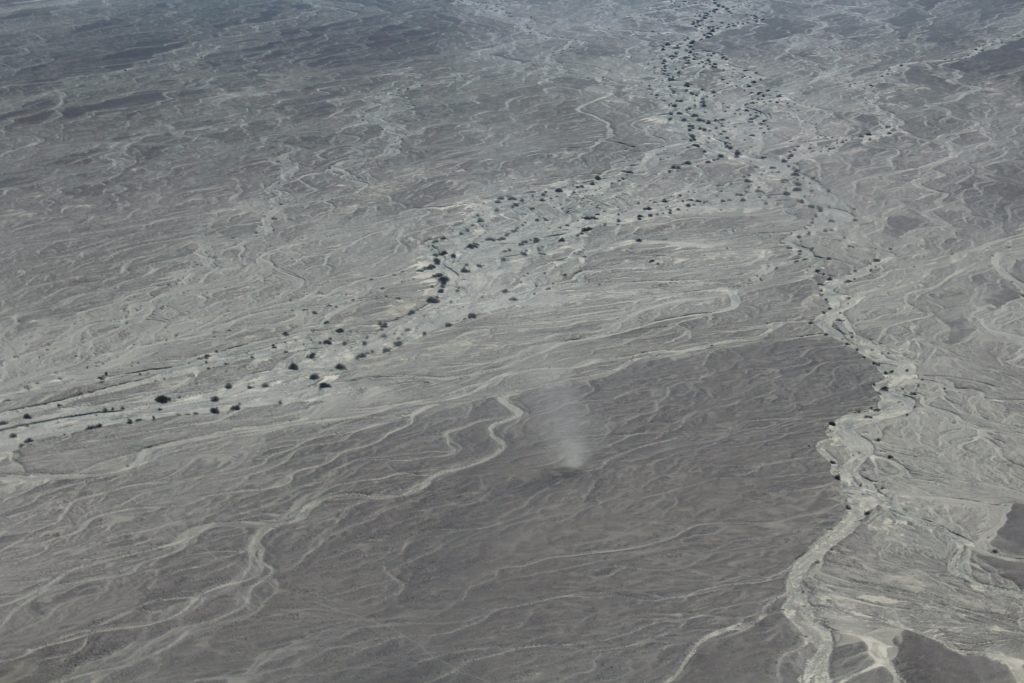 Is there a Tasmanian Devil down in there?

I don’t want to spoil his whole spiel, so I’m not going to include all the fun facts.  But here are some that really stood out to me:

There are way more fun facts, but I don’t want to take it away from you when you go! You’re going right? Of course you are.

The Figures Seen on Nazca Flights!

There are hundreds of lines and shapes across the desert, but the tour will take you to see 12.  You’ll see the Whale, trapezoids, Astronaut, Monkey, Dog, Hummingbird, Condor, Spider, Heron, Parrot, Tree, and Hands (and partially the lizard).  Now, the Tree and Hands are visible from the tower, but obviously you get a much better view from the plane! 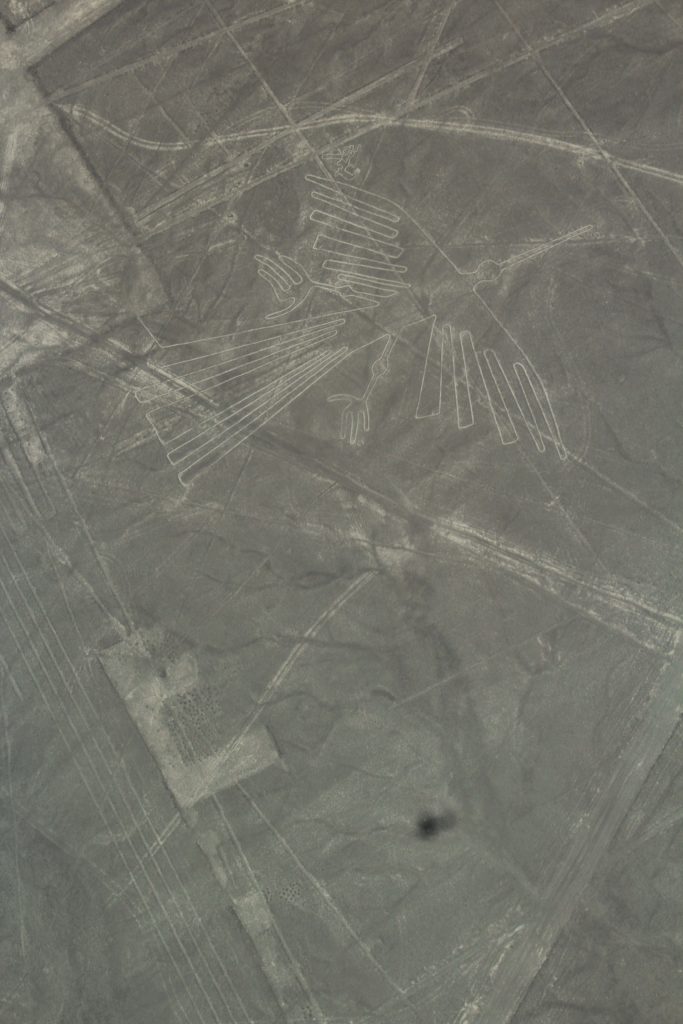 The Whale shows up RIGHT after take-off, so get those cameras ready!  If you  don’t have a quality zoom lens, then you might not have much luck with pictures.

The Astronaut is one my favorites! 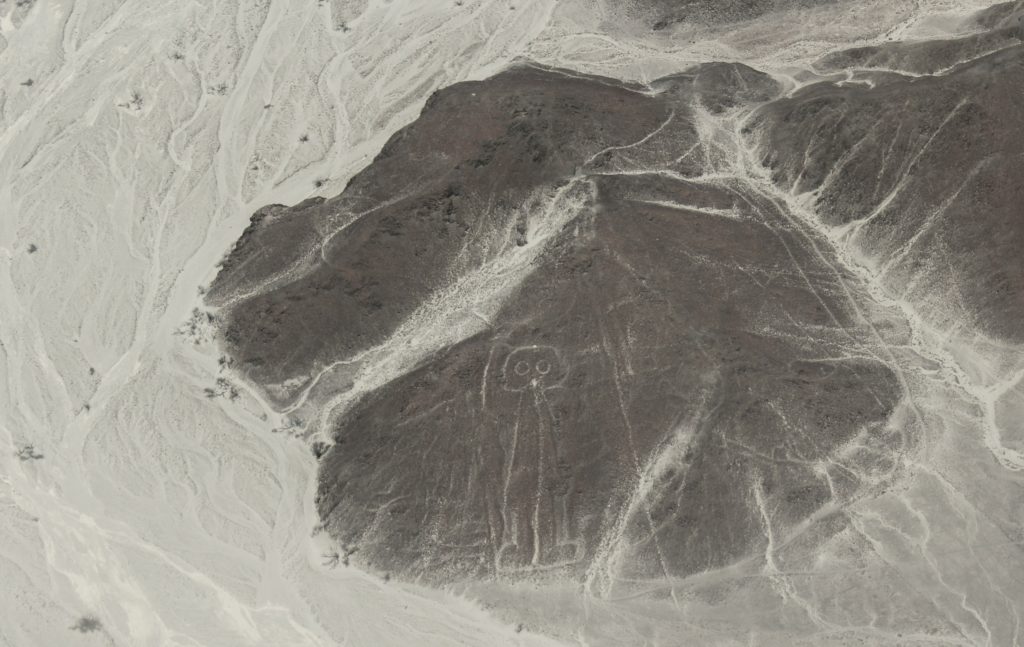 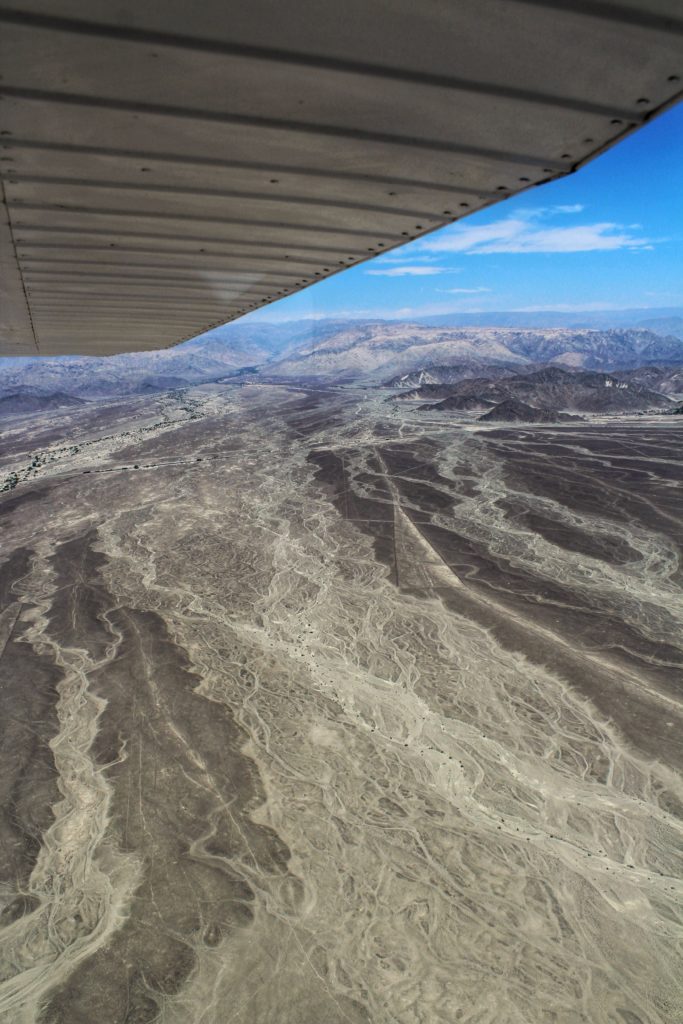 They say that the morning is a better time to go because of turbulence.  I went right at noon, and the flight was fine.  It doesn’t matter what side of the plane you’re on because they swing by on both sides!  About halfway through the flight, I noticed that I was starting to feel a little airsick.  It can be a little disconcerting looking down the whole time while the plane swoops and turns.  To combat this, I started looking down only when it was my side’s turn and looking forward when it wasn’t.  It also probably wouldn’t hurt to grab one of these bad boys.

Getting to the Nazca Lines Tour from Lima

You can get picked up in Lima, by Great Nazca Tours. It’s a pretty long day, but you could even do it as a day trip!  Keep in mind that Nazca is about 7 hours from Lima.

I rented a car because I had other stops that I wanted to make. Keep in mind that there are some tolls (some of which you only have to pay once though).  Check out my Peru Budget if you want to read more about the costs associated with this option.

The bus is probably the way that most people should go because driving in Peruvian cities is really stressful.  If you take the bus, you can also stop by some other cities, breaking up the long drive, and see some cool things. I recommend Paracas and Huacachina!

Either way, you get to see this rather ethereal and almost alien landscape <3. 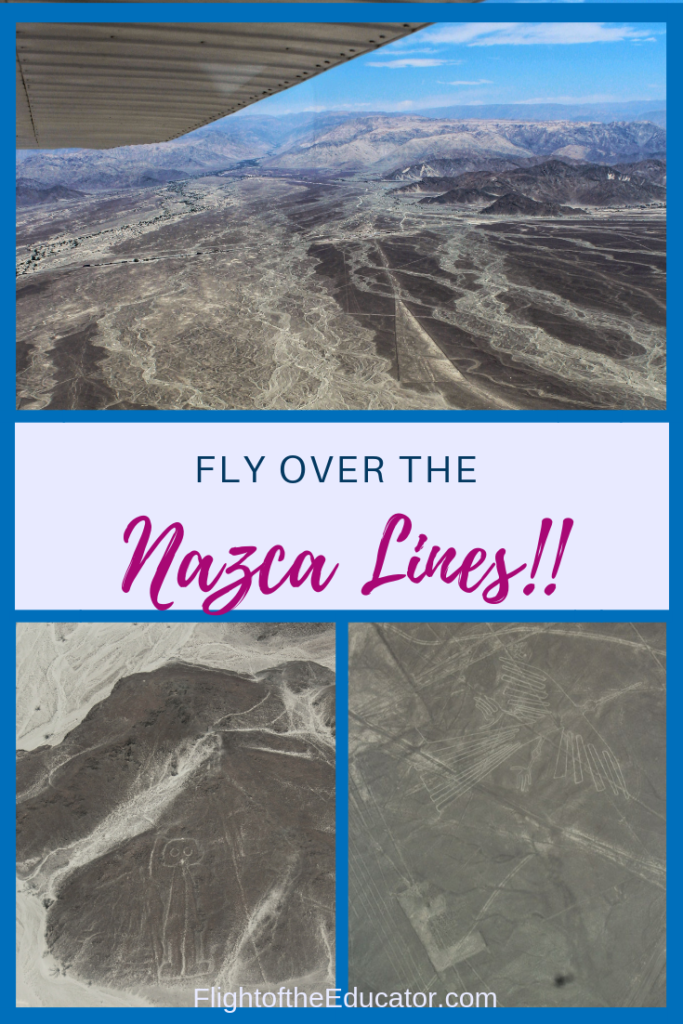 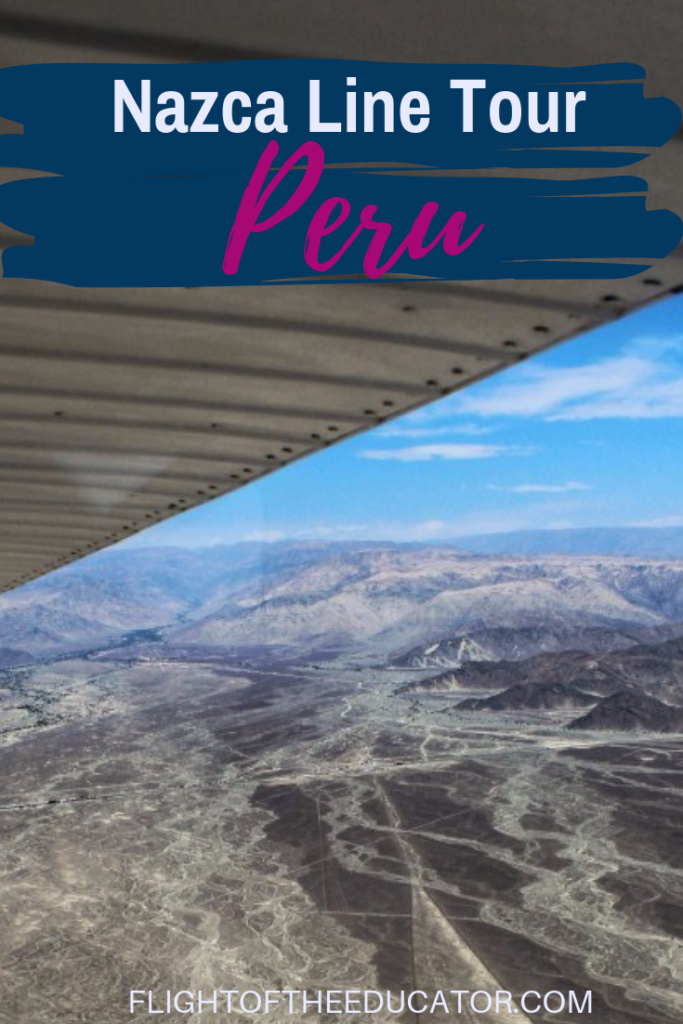 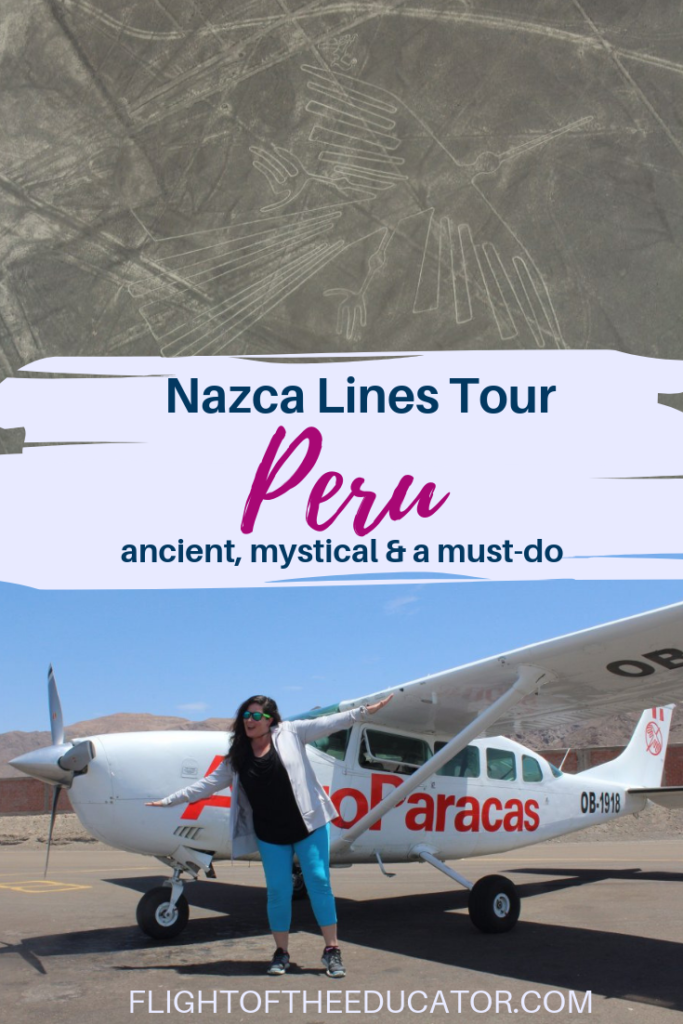 Disclosure: I did receive this flight for free in exchange for a fair and honest review.  Fuller disclosure, I reached out to them because this has been something I have wanted to do for a long time, and this is a fair and accurate representation of my time with them.

What Does a Peru Trip Cost?

We were thinking of doing a fly-over but didn’t quite know where to begin in the planning. Thanks for the informative post!

I hope you do it!

[…] we didn’t take to the air, we’ve heard great things about jumping on a Nazca fight to see the Nazca Lines in all their glory!  If you have the time and the money, it sounds like […]

[…] can drive up to a few of them and view them from the ground (one or two had a viewing platform) or hire a private plane and pilot and take an hour-or-so trip around the area. We opted to hire a plane and at the time it was around […]

Thanks, it’s quite informative

Thank you! I hope you’re able to go some day!

So cool!!!! I haven’t been to Peru or heard of the Lineas de Nazca but this looks so interesting and the small place looks epic! I think I would have been a little scared!!

It was my first time in a little plane, so I thought it was fun!

Ok honestly i did not know something like this even existed. It is so cool to see all these huge figurines that were created such a long time back. I am definitely intrigued to read more on this.

It really makes you wonder why they bothered doing it! And only viewable from the sky!

This seems like a really fun tour! I’m
Not sure if I would brave enough to get on the plane though! Haha!

You can do it! Your blog is Planes, Trains and Champagne!

Fascinating! I’ve never even heard of this, but it would be so incredible. Thanks for adding something completely new to my list. 🙂

You’re welcome! I think people get tunnel vision when it comes to Peru, because they only think about MP!

I’m happy that you were able to support a local company. I hate too see countries where the majority of business owners are not from the city and the money doesn’t go back into the hands of the locals who reside there.I would have been afraid of this tiny plane but it looks cool. I hope to get to Peru one day

Supporting the locals is 100% important!

Wow, what a fun tour! I love supporting local businesses, too! Glad you had such a blast in Peru!

So fun! I hope you make it down!

This looks amazing, would love to do it! How much do they usually charge for the flight? I imagine pick-up in Lima costs quite a bit extra?

Yes, the pick up in Lima is more, but I think they fly from a different city. So I think it’s only like $100 more?

I’m going to Peru in May so I’m super excited that I stumbled upon your post through FTB. Sadly, some truck driver ran over the Nazca lines earlier this year and destroyed some of them 🙁 IF it’s still available, I will contact the company you have listed, love giving back to the local community 🙂 Thanks for the rec!

I saw that! He only drove over one set, I think. There are also dozens and dozens. They definitely weren’t all impacted! The lizard one actually had a road built through it’s tail before they realized! The guide made a joke that it’s ok because lizards can grow their tails back lol

Thank you for sharing this! Peru is high on my bucket list and I will definitely keep this in mind x

You’re welcome! I hope you can visit some!

You cann’t consider simply how a lot time I had spent for this information! Thank you!

[…] or any other place in this country, it’s not going to be included here. However if want to take a Nazca Lines flight I recommend this post written by Flight of the […]

[…] we didn’t take to the air, we’ve heard great things about jumping on a Nazca fight to see the Nazca Lines in all their glory!  If you have the time and the money, it sounds like it […]

This is awesome I had no idea this was even in Peru!!