Top Posts
How to Get Paid Market Research Studies and...
8 Travel Hacks to Save Money on Flights...
22 Things to do in Peru besides Machu...
My Argentina Budget!
Israel Budget ~ How Much Does a Trip...
10 Things No One Tells You About Iceland!
24+ Best Places to Visit in China Besides...
My Cuba Budget
14 Reasons to Road Trip to Florence Alabama
My Jordan Budget!
Home TripsAround Atlanta Looking for a Memphis Bar with Bar Games? Try 3!

Looking for a Memphis Bar with Bar Games? Try 3!

I’m a self-admitting “Nerd,” and I absolutely love it when bars and restaurants have games.  I’m always searching for them, so when I went to Memphis, I was pumped to discover not one but THREE fun Memphis bars with bar games!  They all have TONS of options for games as well as tasty brews and food.

The first thing I noticed when I walked into Loflin Yard was the brightly colored and dramatic yellow canopies sheltering the occupants from the intense summer sun.  Since I have pale skin, that was a necessity for me to keep me outside! 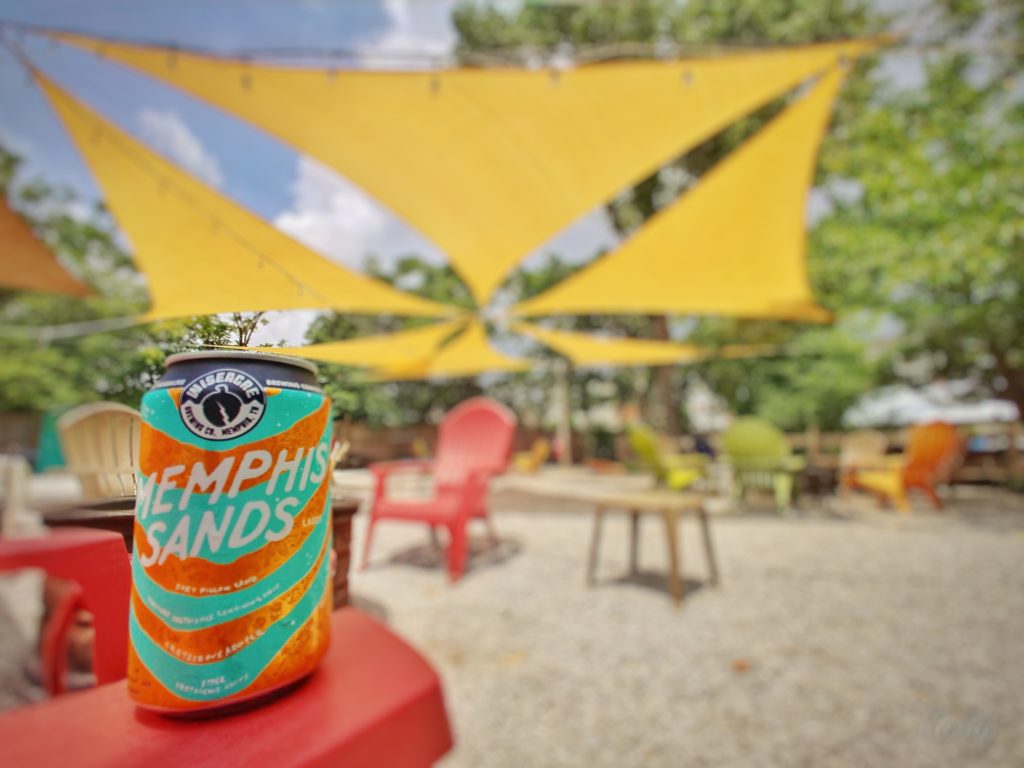 The outside portion of Loflin was a playground of fun and casual places to hang: patio tables, Adirondack loungers, and even hammocks!  However, what next caught my eye were dog water bowls. Yes. This is where my people belong.  Any place that treats their pooches well is a place I want to be.

The games available were astounding, and I wish there was something like it in Atlanta (where I’m from).  There were games for every sort of person: Giant Connect Four, Corn Hole, Badminton (Or Goodminton if you’re better at it than me!), ladderball, and the crown jewel, GIANT BEER PONG! 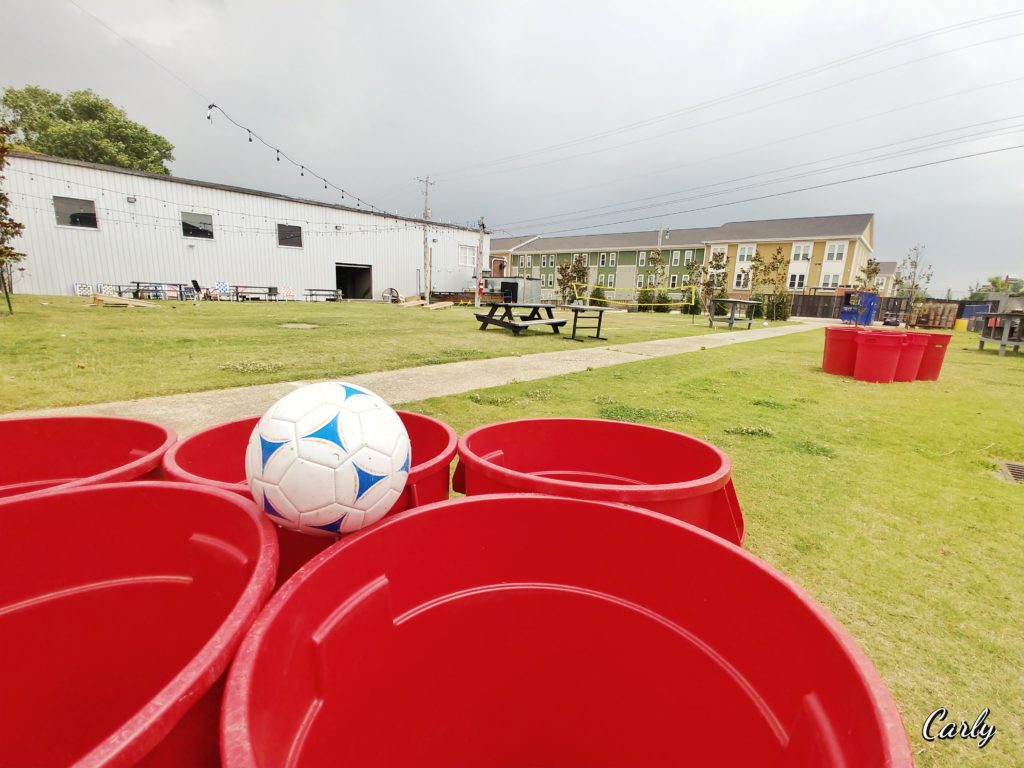 Beer pong is normally played with cups and tasty beer that you drink as soon as a ping pong ball gets thrown in. Well, this one is a little different. Instead of using a ping pong ball, you get a soccer ball to throw into red garbage cans that look like large red solo cups!

You don’t fill the trash cans with beer though because… well, I just can’t imagine a scenario where that’d be a good idea! Instead just fill a normal glass with whatever you want and enjoy your germ-free drink sans ping pong ball.

I’m not known for my food and drink choices other than that they are “lame,” but I did try the local lager, Memphis Sands which was very nice.  The brisket tacos were also very tender. All I’m saying is, go for the games, stay for the food.

Back to places to hang out–first up, there’s an inside portion with frozen drinks and a stage with live music.  It’s a pretty large room with table seating and bar seating, so you can get as close or as far from the action as you want!

You can also head outside, pass under old shipping containers, and play volleyball in the sand pit.  Someone brought out what looked to be maybe hula hoops, so I think they had several types of games that you can play with in the sand. I wasn’t wearing the shoes for sand, so didn’t go over there, myself.

If you go even deeper into the complex, there’s yet another stage!  This one is very dramatic with a really retro Skating sign. 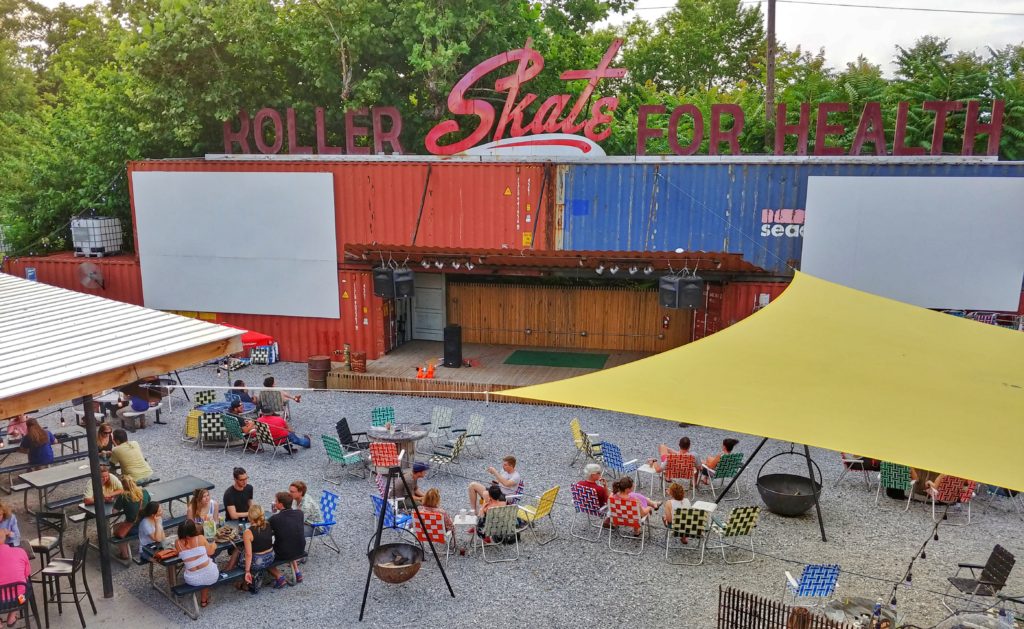 All around the stage are movable chairs, so you can sit where you please! Just don’t get in the way of the main event… Ping Pong!  They have tons of Pong tables to play on!

If you get tuckered out from Pong, there’s always the fun rooftop bar with a patio and private bar.  I like that it was right there, and you don’t have to go downstairs to get anything you need.  Sometimes the rooftop area is closed for private events though, as it was for us! 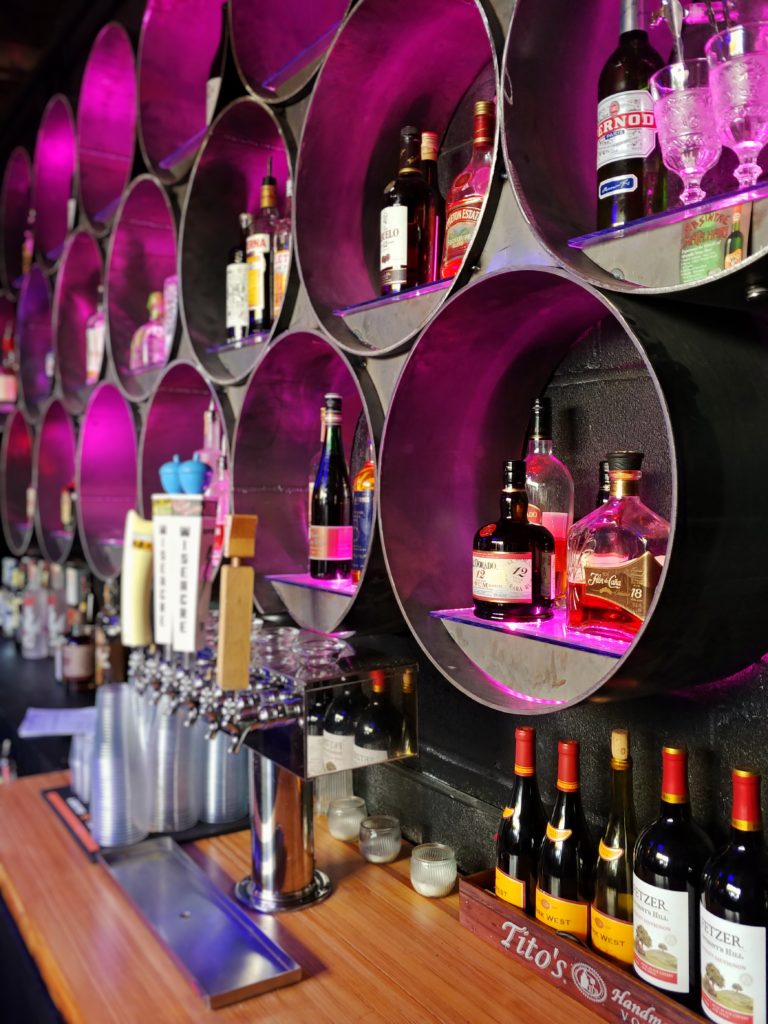 Now, the first two had a wide assortment of outdoor and large games, The Rec Room has… well… a wide assortment. They’ve got console, arcade, pinball, board and of course the usual bar games.

I sadly was unable to get to The Rec Room, but Atlanta has some similar ones, so I didn’t make it a priority.  But I still wanted to ~Rec~ it to you.  See what I did there?

Want to bring games with you?- Here are some fun beach games!

Special shout out to Memphis Tourism for pointing these places (and more!) out to me and my fellow bloggers who attended the Bloghouse Conference, and to Mediavine for also partially sponsoring our stay!  And of course the Peabody Hotel for letting us have the conference there, with a private duck march <3.

If you’re in Memphis on Thursday, make sure you make it out to the Peabody Rooftop Party! 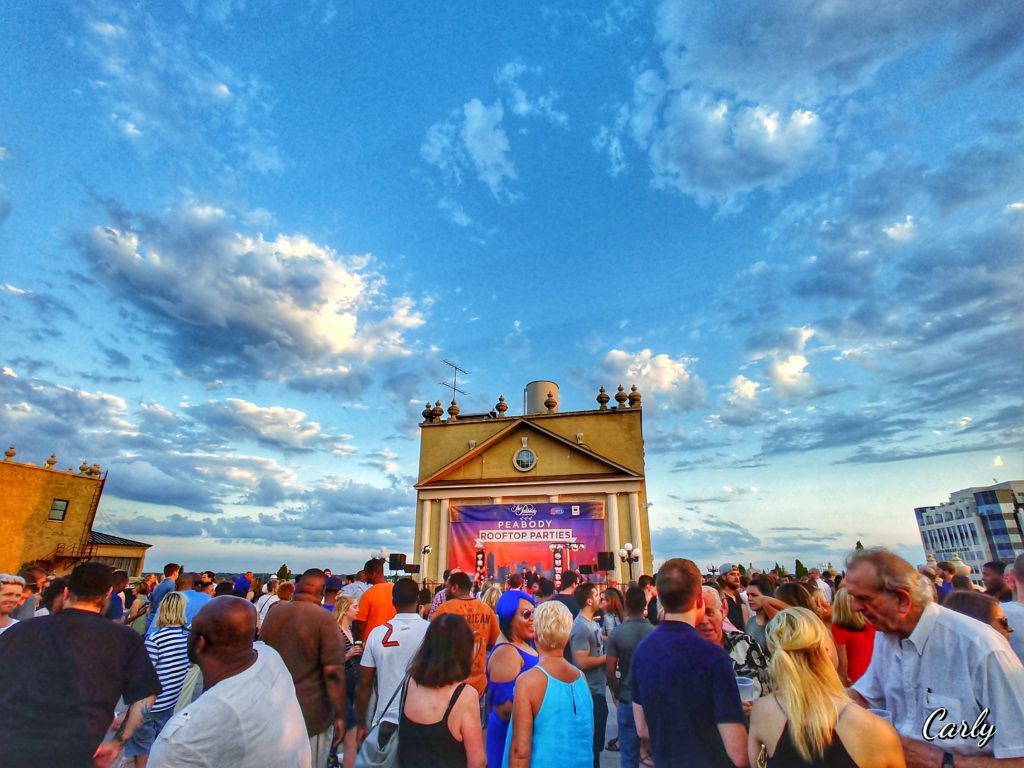 And if you’re into rooftops, don’t miss out on the Old Dominion Distillery’s magnificent view of the ol’ Mississippi! 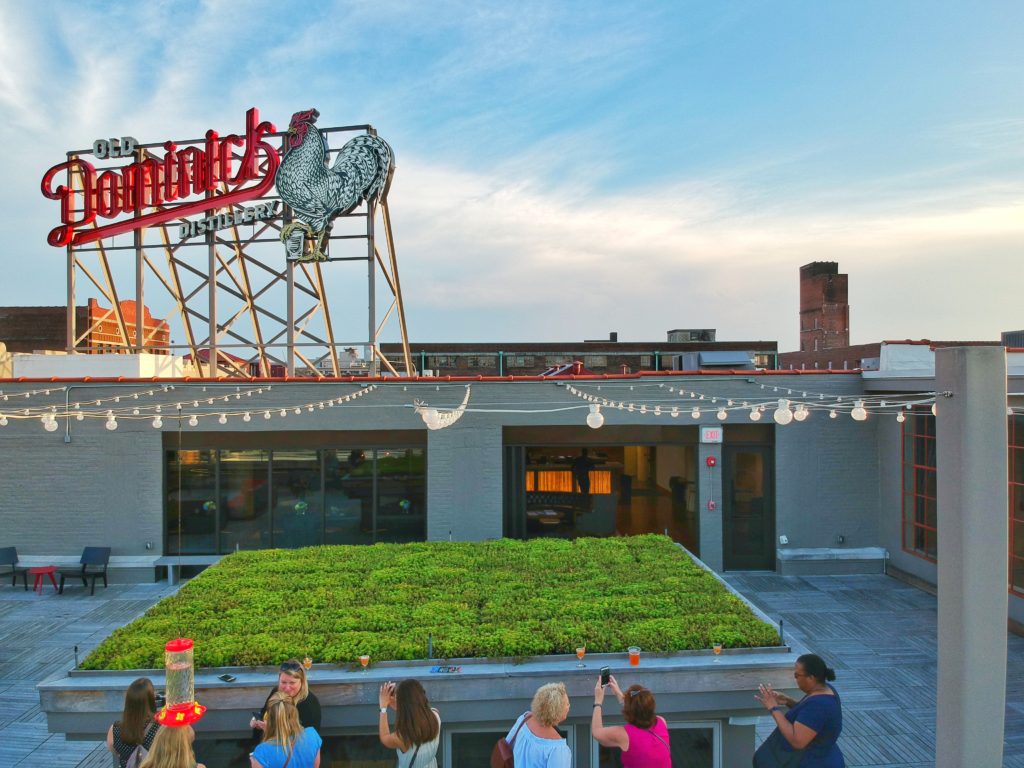 Pin if you want to save these suggestions for later! 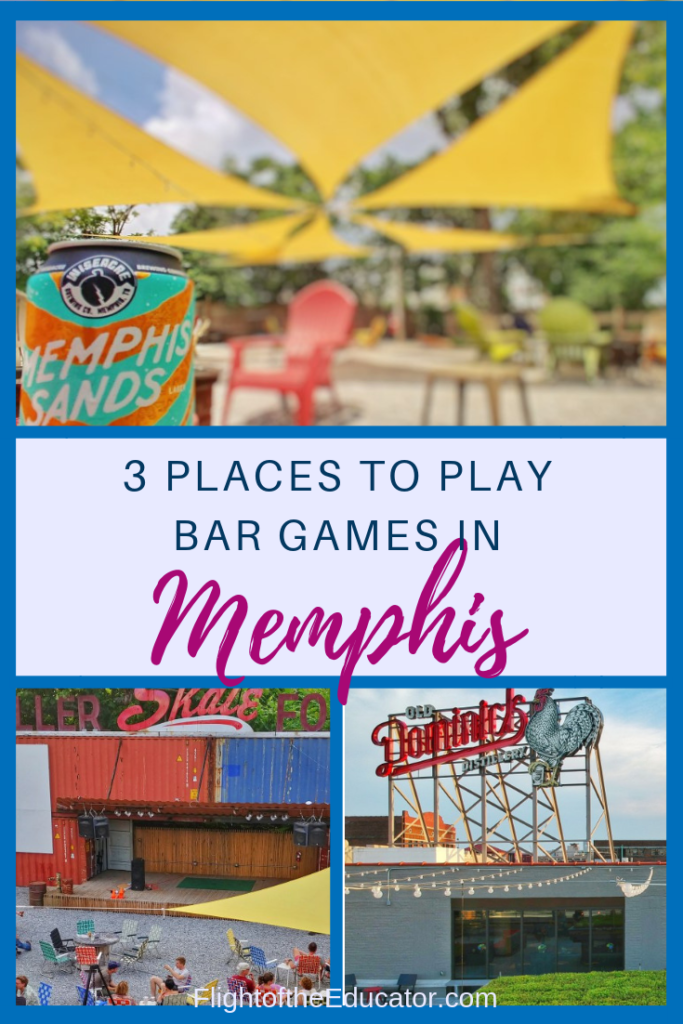 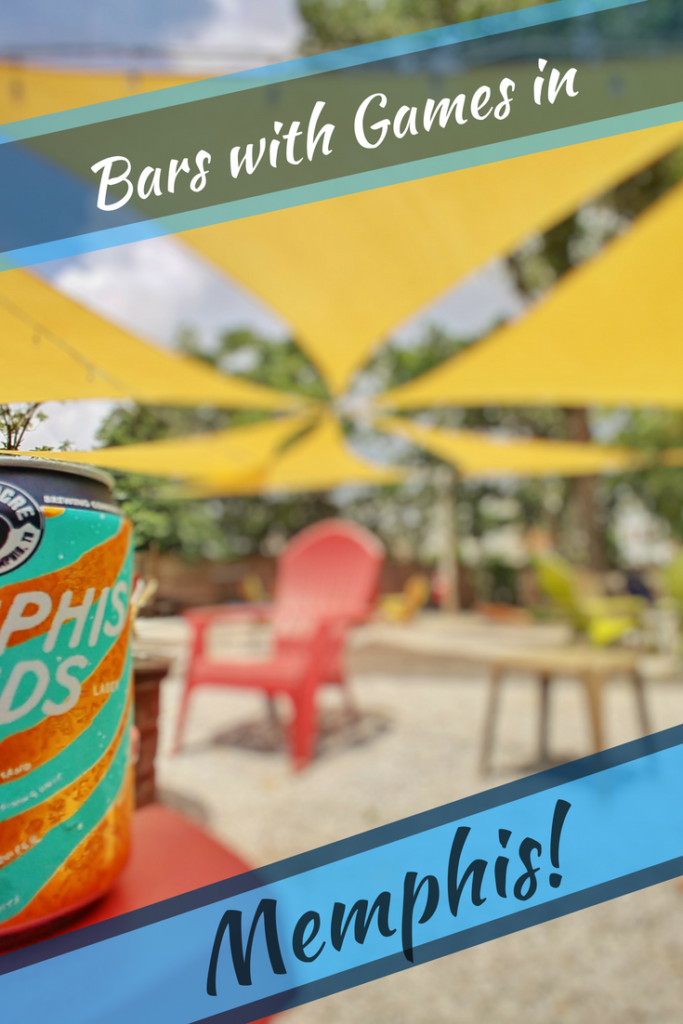 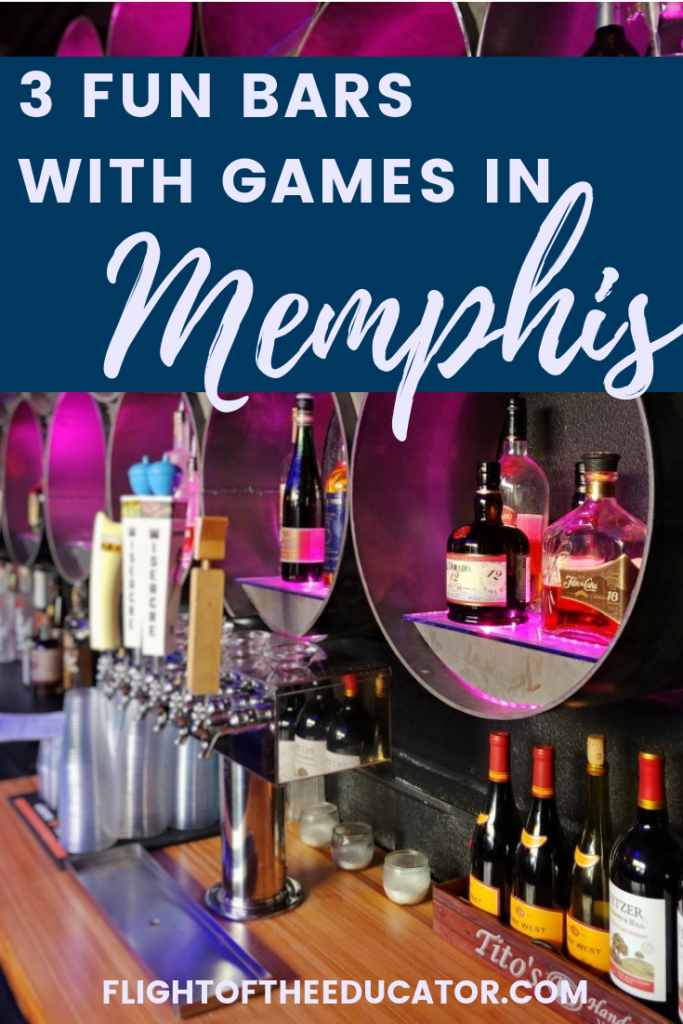 […] some of the other conference attendees: No Back Home, Betsi’s World, The Petite Adventurer, Flight of the Educator, Chasing Departures, Raulerson Girls Travel, Myles to Travel, Campfires & Concierges, LL World […]

[…] Loflin Yard or Railgarten – These cool indoor-outdoor bar-restaurants are perfect for a chilled night out. They're sister restaurants in different corners of Memphis, and both feature cool outdoor seating and games. (Read more about them here.) […]

I haven’t been to Memphis since I was a kid. I played games, but not in bars. This looks like tons of fun!!

Some of them were kid friendly! I would have loved the giant connect 4!

We’re so glad to hear you had such a great time at Bloghouse in Memphis, Carly! Your post is definitely giving us the itch to travel again. You’ll always find us at the giant Jenga. 😉
— Susannah at Mediavine

Giant Jenga is where it’s at!!

These all look good, but I especially like the one with dog water bowls, and a more palatable way to play beer pong.