Top Posts
How to Get Paid Market Research Studies and...
8 Travel Hacks to Save Money on Flights...
22 Things to do in Peru besides Machu...
My Argentina Budget!
Israel Budget ~ How Much Does a Trip...
24+ Best Places to Visit in China Besides...
14 Reasons to Road Trip to Florence Alabama
My Cuba Budget
My Jordan Budget!
10 Things No One Tells You About Iceland!
Home TripsAround Atlanta Georgia Renaissance Festival 2018

If you’re like most people from Atlanta, around early April you start hearing the exciting trumpets announcing an annual festival South of Atlanta.  I’m of course talking about The 2018 Georgia Renaissance Festival.

Much like Yours Truly, the Georgia Renaissance Festival has graced Atlanta for a solid 33 years.  Being a card carrying Nerd, I’ve been frequenting the Land of Lords and Ladies since High School.  I even wore a beautiful bracelet/ring piece of jewelry to prom to accompany the Medieval-inspired dress that I *made*… yes made.  Basically, I’ve been going for an embarrassingly long time, and I’m here to help you make the most out of the 2018 GA Ren Fest.

What activities does the Georgia Renaissance Festival have?

There’s plenty to do besides get a sunburn! You can find a neat interactive map here.

There are a myriad of shows available for different interests and age groups.  Here’s a list of all the shows available, and you can even filter by family friendly, New for 2018, and adults only.

I always check out Barely Balanced first. Mostly because they are the closest stage to the entrance…. But they’ve also been a Georgia Renaissance Festival staple for as long as I can remember.  Happily, they update their jokes every year!  They do some pretty impressive feats for Small, Medium, and Large people, but be warned… even though this is listed as “Family Friendly” there are definitely some innuendos that will ~hopefully~ go over small children’s heads like the flaming machetes go over theirs. 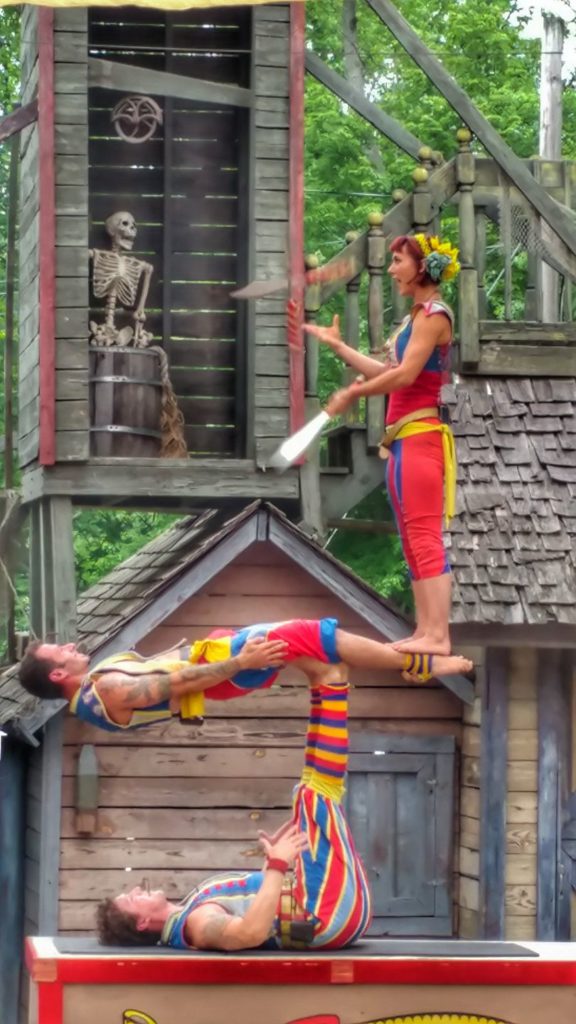 I’m not sure it counts as a “show” per se, but the Pirate Auction is not to be missed.  Make sure you swing by the giant pirate ship by the  jousting arena earlier in the day because they give out tickets for a raffle! I have yet to win anything, but that’s just because I’m unlucky.

At 4 pm, the pirates come out and walk the plank to bring guests free stuff and pretty amazing deals.  They auction off amazing weapon replicas for much cheaper than you could get in their shop.  There’s also a game called “Trust The Pirate” and trust me… whatever they offer you… take it.  It’s a mystery item for a known price, and it is ALWAYS a good deal. It’s definitely worth sticking around for. 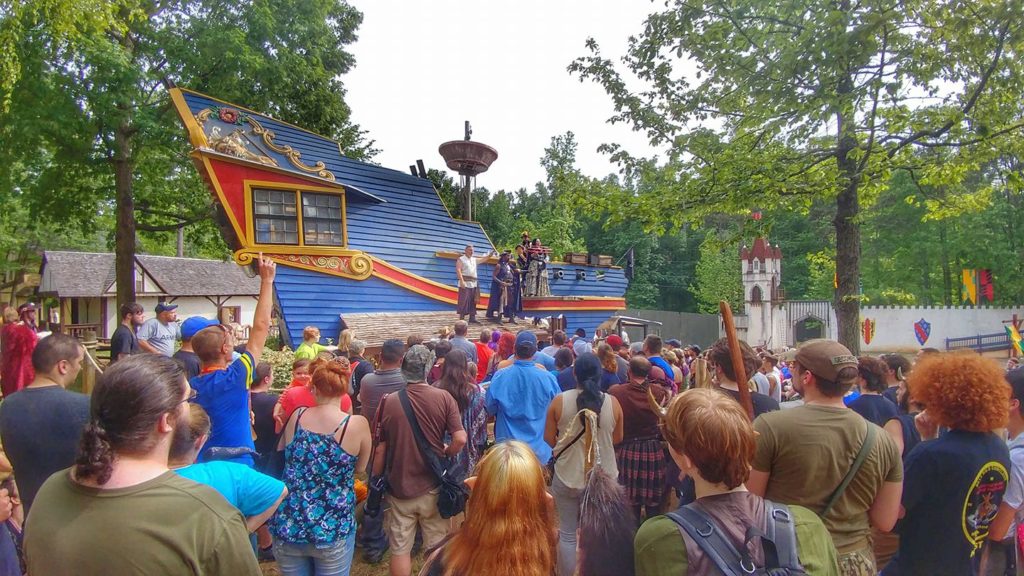 I don’t think it’s new this year, but it was new to me because I’d never seen it before.  It happened on… the Mud Stage. So you can guess that there was a lot of mud.  I’d been trying to get seats close to the front in order to get good pictures, but the bleachers were suspiciously covered in mud.  The premise was that we were a Jury to decide which brother “won.”  It was pretty entertaining actually, and there’s just something hilarious about grown men playing in mud.  Don’t worry though.  They’ll alert you when it’s time to scoot back if you don’t want mud on you. 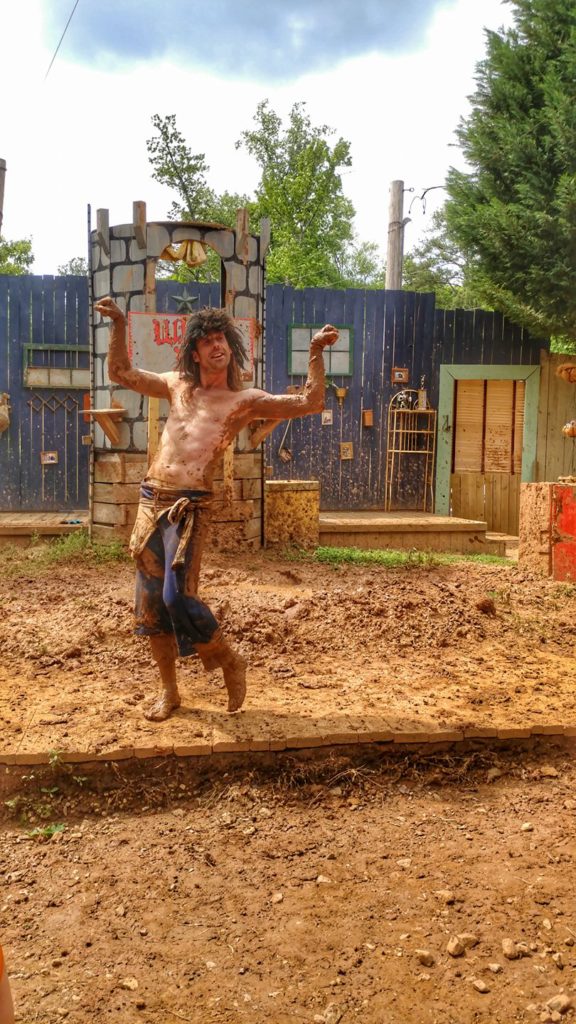 Also new this year is the WHEEL OF DEATH!  My boyfriend, who’d never been to the Georgia Renaissance Festival before, came with me, and he said he really enjoyed this show (and some others!) because they interact so much with the audience.

There were just so many different shows! You have to check out the list! If you’re having trouble ~juggling~ the different options, they have a cool feature that will make an itinerary for you! You just click what you’re interested in, and it’ll sort you out!  Check that feature out here!

Interspersed throughout the whole festival are tons of games and rides.  There’s really something for everyone.  Whether you’re interested in games of skill, strength, or if you’re a little kid… there’s a game or “ride” that you can be successful with.

Not to brag (whatever, I’m totally bragging), but I won the Robin Hood Archery contest when I was 11.  I know. You had no idea I was such a big deal.  So I was super pumped to shoot a bow and arrow again!  The arrows have definitely seen better days and most were missing their vanes (the fake feathers), but it was such a short distance, that I guess it didn’t really matter too much. Ok, I missed my first shot PRETTY massively, but I still landed a bull’s eye and got a feather for my cap 😀 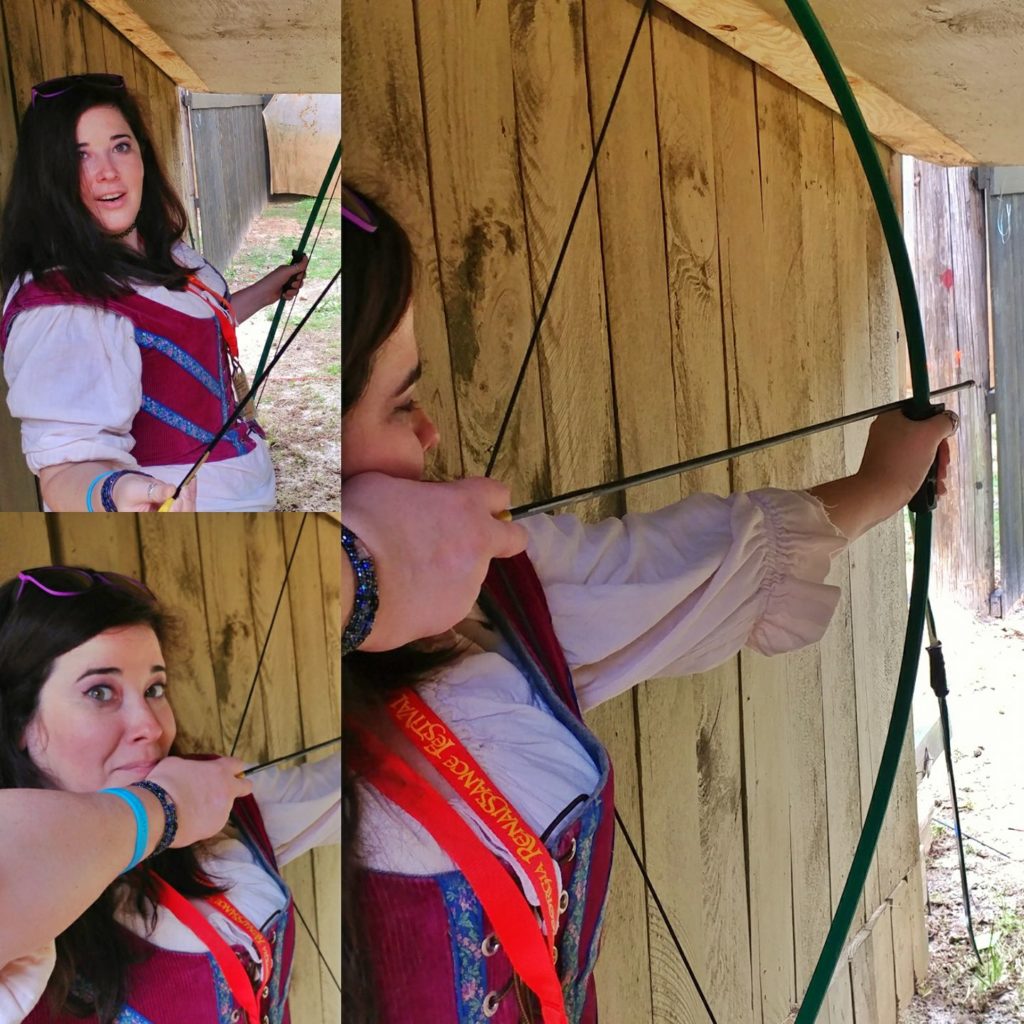 Besides the jousting that you can watch the professionals do, there’s also a “Flying Griffin” that you can ride on and try your own hand at jousting!  I did it a few years ago, so even adults are allowed!

They have a new attraction from last year called Ghosts of the Abyss.  It took the place of my go-to “Get Away from the heat” ride.  I used to go into that ride because it was dark and noticeably cooler because of fans.  I decided to check this new ride out (not only because I was interested but also to see if the temperature would be cooler).

It was cool both literally and figuratively!  I actually screamed out loud a few times… I’m an adult :S

I love the games, rides, and shows, but honestly… my favorite part of the GA Ren Fest is the variety of Artisans.  There are demonstrations were you can see ~in action~ how they create things!  There are shops galore of items to buy (some are period true, some are pretty anachronistic but still fun, and some are only mildly related <I’m looking at you, fairies>!) 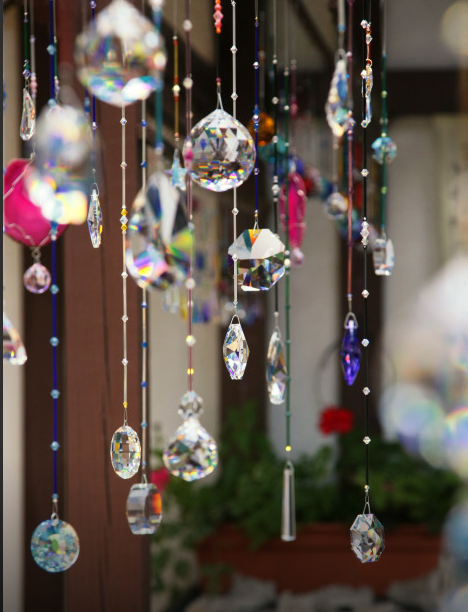 The larger stores will take credit cards, but some places are small and only take cash.  Make sure you bring some cash!  There’s an extensive list of vendors here.

You would die if you ate and drank everything available. There is just too much variety.  They are of course famous for the massive Turkey Legs.  I’d say my biggest regret was not trying the Macaroni and Cheese on a stick.  I usually get the shrimp and chips, which has always been on point. I wish there were 6 shrimp instead of 5, but not bad for $6.  The drinks range from about $3 for waters/sodas and $5.50 and up for alcoholic drinks (some include decorative cups/mugs to keep!).

Absolutely!  I managed to drag my non-nerd boyfriend down for his first foray to the fest, and he had a great time!  I caught him cracking up at the different shows, smiling at the joust, and cheering loudly for the performers.  I was very interested to see how someone would enjoy the fest if they weren’t as into it as I was, and I’m happy to report that he did enjoy it! He said his favorite part was that the shows were interactive with the audience. 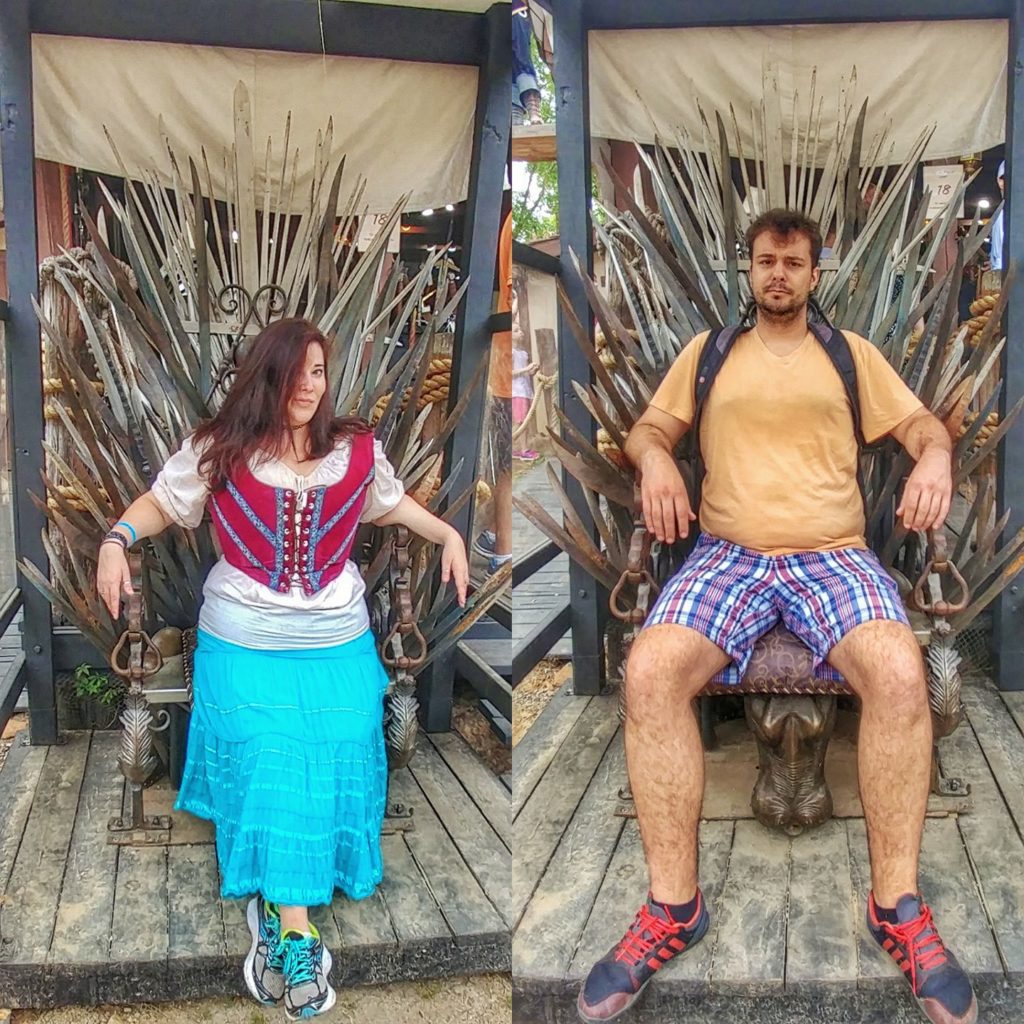 Do I have to dress up?

You don’t have to, but they do encourage it. You’ll see people who work there dressed up in period legit clothes, but you’ll also see visitors dressed up as a variety of things: fairies, vikings, pirates, belly dancers, and truly random outfits.  Not to judge, I guess they just wanted an excuse to dress up weird… I wasn’t sure how a rainbow unicorn in a crop top is Renaissance, but ::shrug:: To each their own!

If you’re keen on dressing up but not committed to buying anything (they have tons of shops all around the fest that let you try on and purchase corsets/waist trainers/ blouses/skirts), there is also a place at the entrance called the Belrose that lets you rent a costume! They come in a variety of sizes, colors, and expenses. 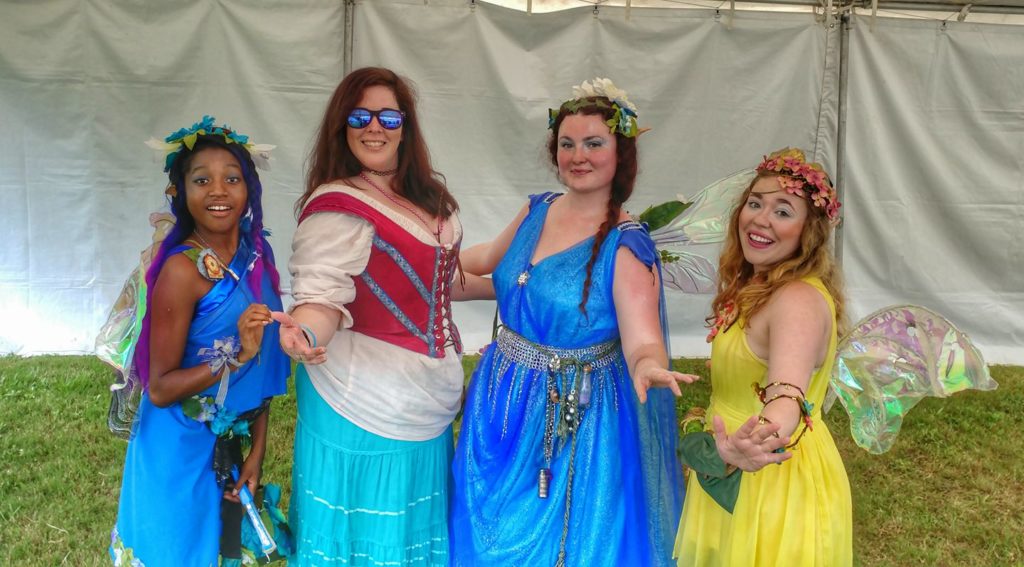 Prices range from about $25 to $70 (I believe that was the most I saw).  It depends if you want a wench or a noblewoman outfit! They also have clothes for children and men, and they rent wagons for the kids.

In case you were worried, they launder the clothes between uses, so you won’t be wearing someone else’s sweat!  I decided that this was the year that I was going to rent one!  It was a lot of fun, and I’m definitely doing it next year.  It was surprisingly less hot than I anticipated!


Are there Renaissance Festival Coupons?

There are a few ways to get some Renaissance Festival discount tickets! Regular Adult ticket price is $24 at the gate. You can:


Is it always the same?

Every year, definitely not, and even every weekend, I’d say no as well!  They also have different theme weekends.

Well, it’s only open a few weekends in the year, but I recommend getting there early in the morning before the heat starts or  later in the afternoon.  If you come later, make sure you’re there before 3:30, so you can get some tickets and see the Pirate auction.  Check out the schedule to see what shows there are so you don’t miss out!


How much money should I bring?

Most places take cash only unless you buy something expensive from a shop.  If you buy the package of 4 or you’re not into souvenirs, you probably don’t need much cash.

Here’s an estimate of costs though:

That sounds so much fun, I hadn’t heard of the festival before! I love the dresses, so pretty.

Of course you have to dress up! Go to the local thrift store and find something fun.

Looks fun! I’ve never been to anything like this (except for maybe Halloween activities in Salem, MA), but I had it in my head that anything with the word “festival” was going to be super expensive – but sounds super affordable. I like that you bring up ‘I’m not a nerd – will I still have fun?” because doing things outside your normal hobbies/interests is really important!

A lovely read! I really liked all those images and Giphy videos. Ghosts of the abyss sounds interesting!

Wow I live in Atlanta too! I had no idea about this festival but I guess I haven’t been looking for it? I remember going to a couple when I was a little younger but would like to try one again. Costume and all! We should totally meet up if you live here!

I’ve never been to a renaissance fair but there are quite a few near where I live. Your post is making me want to visit ours next time it’s here! I didn’t realize there were so many fun activities, I think my daughter would have a blast.

I have never heard about this before, it looks very interesting for sure. Interesting read

This looks like so much fun! My sister lives in Georgia and this is now on my list for when I visit.

Look so fun! I like the little clips. I remember going to a renaissance fair in 7th grade and doing crafts. I would definitely dress up if I want to one again 🙂

This looks like such a fun way to spend a weekend! I love that there are Renaissance Fairs and Festivals still because there is so much to do.